On June 2nd, 2022, at approximately 7 p.m., with assistance from the SPS Tactical Support Unit, a 39-year-old man was arrested in the 400 block of Ludlow Street. He was suspected to be trafficking cocaine and methamphetamine, and had access to firearms.

A search of the 39-year-old recovered:

CRT investigators and TSU officers were then authorized for a search warrant, at a residence in Waldheim, Saskatchewan. The subsequent search recovered: 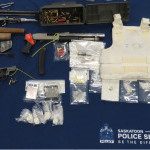