At this time [**REDACTED**] is facing the following Canadian offences; Abduction in Contravention of a Custody Order and Public Mischief.  Additional charges are being considered as the criminal investigation progresses.

The SPS would like to thank the RCMP, Canada Border Services Agency and U.S. Homeland Security for their assistance in returning [**REDACTED**] to Saskatoon.


Charges have been laid in relation to a missing persons investigation that involved authorities in both Canada and the United States.

As a result of investigation to date, the Saskatoon Police Service, in consultation with the Crown, has charged [**REDACTED**] with the following Canadian offences; Abduction in Contravention of a Custody Order and Public Mischief. Additional charges are being considered as the criminal investigation progresses.

As a result of investigation to date, the United States Department of Homeland Security has charged [**REDACTED**] with the following United States offences:

Title 18 U.S. Code - 1028A (a) (1) provides that it is a felony offense for a person, during and in relation to any felony violation enumerated in subsection c, to-wit: false statements in the use of a passport, to knowingly possess or use, without lawful authority, a means of identification of another person.

[**REDACTED**] remains in custody in the United States where she will be making her first court appearance today. Investigators with the Saskatoon Police Service are consulting the provincial Crown to arrange for her future extradition to Canada.

[**REDACTED**], age 7, was reunited with a legal guardian on August 5th and returned to Canada on August 7th.

The investigation is ongoing and the Saskatoon Police Service continues to ask anyone with information believed to be relevant to contact the SPS at 306-975-8300, Crime Stoppers at 1-800-222-8477, or your local law enforcement agency.


The Saskatoon Police Service in conjunction with the United States Department of Homeland Security have located missing persons [**REDACTED**] and her son [**REDACTED**].  The two were found in Oregon City, Oregon at approximately 11:30hrs (CST).  Both are reported to be safe and well.  Agency representatives are currently working out the details of arranging for their return to Canada.

Throughout this investigation the Saskatoon Police Service Missing Persons Unit, along with support from numerous SPS units, government agencies, the RCMP, Saskatoon Fire Department, FSIN, external private industry partners, members of the general public and the following law enforcement agencies in Canada and the US who worked diligently to locate [**REDACTED**] and her child; Canadian Border Services Agency, Canadian Air Transport Security Authority, the Canadian Centre for Child Protection, the Billings Police Dept., Oregon City Police Dept. and the West Linn Police Dept.  Investigators were recently successful in establishing that the two had illegally entered the United States.  The investigation was then able to track them to the Oregon City location where cross-border law enforcement cooperation was utilized.

At this time, U.S. authorities are considering the implications and any potential action as a result of an illegal entry into the US. Pending any action by U.S. authorities [**REDACTED**] will be returned to Saskatoon to meet with investigators.  U.S. agency representatives in consultation with the SPS are currently working out the details of returning [**REDACTED**] to a legal guardian.

As this investigation will continue to unfold rapidly a media availability is scheduled to be held on Monday, August 8, 2022, regarding any updates.  Further information on the availability will be released Monday morning.

The Saskatoon Police Service continues to ask for anyone with information in regard to this investigation to contact the SPS at 306-975-8300, Crime Stoppers at 1-800-222-8477 or your local law enforcement agency.

The Saskatoon Police Service is continuing the missing persons investigation regarding the disappearance of 48-year-old [**REDACTED**] and her 7-year-old son [**REDACTED**].

Investigators are currently requesting any video/dash-cam footage that might assist in the investigation. Specifically, any relevant surveillance of the Chief Whitecap Park area between 6:30 p.m., on Friday July 22nd, 2022 and 9:00 a.m., on Saturday July 23rd, 2022. A picture of the red Ford F-150 belonging to [**REDACTED**], that was located by RCMP at Chief Whitecap Park, is included for comparison.

Anyone with possible video surveillance is asked to email police.info@police.saskatoon.sk.ca (or call 306-975-8300 for further details).


Saskatoon Police are continuing their efforts to try and locate a missing mother and son.

At approximately 9:00 a.m. July 25, 2022 the red Ford F150 belonging to [**REDACTED**] was located by the RCMP at Chief Whitecap Park, just south of Saskatoon.  Also located at the scene were some personal belongings.  In addition, the SPS learned that a person in the area had discovered her purse on Saturday, July 23rd and had turned it in to the RCMP.

Based on this new information the SPS is coordinating efforts to do a search of the South Saskatchewan River.  The search will include the Public Safety Unit and the Air Support Unit along with partner agencies.

Members of the public are asked to refrain from visiting Chief Whitecap Park, so that the SPS can conduct its investigation.

There are concerns about [**REDACTED**]’s well being as she has not been in contact with friends or family which is out of character.

Photos are attached for distribution. 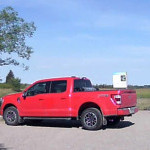